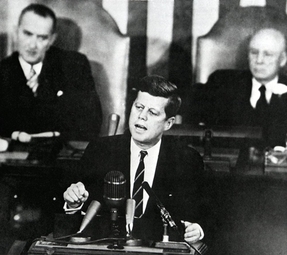 The Apollo 11 mission was a mission to accomplish a goal set by former president, John F. Kennedy. Kennedy set an ambitious goal of putting a man onto the Moon and then returning back to the Earth safely before the end of the decade. After years of hard work, it was finally accomplished on July 20, 1969, when famous Neil Armstrong stepped down onto the surface of the moon. The Apollo 11 was the first ever manned lunar mission to ever land on the moon worldwide!
Above: John F Kennedy giving his "We choose to go to the Moon" speech on September 12, 1962 at Rice University
Go to "meet the astronauts"